This fruit-topped angel food cake in the shape of fairy wings that is inspired by Disney’s The Pirate Fairy is the perfect addition to any fairy party.

Disclosure: I am a member of the Collective Bias® Social Fabric® Community. This shop has been compensated as part of a social shopper amplification for Collective Bias and its advertiser. #CollectiveBias #ProtectPixieHollow

Disney’s The Pirate Fairy! will be released on BluRay/DVD/Digital HD on April 1st, 2014. When you purchase it exclusively at Walmart, you will also get the Pixie Hollow Bake-Off DVD which includes ten animated shorts.

Celebrate the launch of The Pirate Fairy! with a movie viewing party at home. I’ve got you covered for dessert with a yummy Pirate Fairy angel food cake topped with fresh fruit.

You can purchase a store-bought angel food cake for this, but I found they were a little smaller than I wanted. Here is how you can make one from scratch, and you don’t need an angel food cake pan.

How to make an angel food cake pan at home

Line the bottom of the pan with parchment paper and then place a small tin can in the center. Having something in the center helps the cake to bake evenly and flat. Without that, it would most likely dip in the middle while the outside rises up the walls of the cake pan.

Tip: You will need to weight the tin can down because as the cake rises it’s not heavy enough to support it. I learned this the hard way. Place a tray on top until the cake has built up enough stability around the can and then remove the tray. 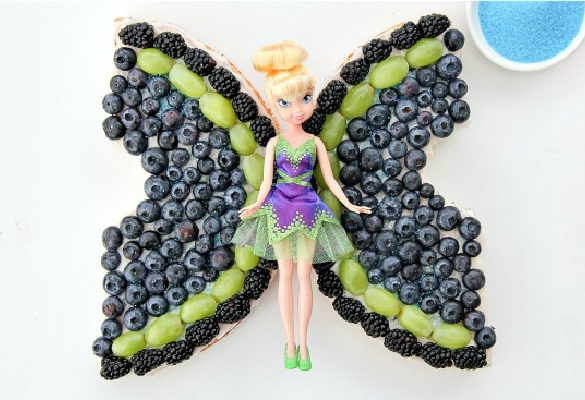 I had a little extra cake mix over so popped it into cupcake pans to make a few angel food cupcakes too.

If you are dairy-free and can’t have whipped cream, then use Earth Balance spread and coconut milk to a standard frosting recipe instead of butter and milk.

While I was at Walmart I found The Pirate Fairy! Tink doll in the toy department. This makes the perfect addition to the cake wings.

About the Pixie Hollow Bake Off

The Pixie Hollow Bake Off DVD follows Tinker Bell as she challenges Pixie Hollow’s culinary superstars when she refers to the art of baking as “just tinkering with flour.” Our favorite fairies must use their talents to help Tink in a head-to-head bakeoff with head baking fairy Gelata (voice of Giada de Laurentiis) and her Baking Fairies. The winning cake will be featured at Queen Clarion’s Arrival Day Party.

Watch the trailer for The Pirate Fairy! here.

How to Make a Box to Store Tea Bags

A Craft Party for Little Girls

A Ginger and Pear Tart on a Holiday Grazing Board

How to Make a Pencil Vase Gift for the Teacher

Great idea and work. We love way of doing this. Thanks for sharing…

Tonya, this cake is beautiful! I love how colorful it is and the doll in the middle keeps the fun going even after the cake is gone 🙂 #client

Excelent!!! Awesome cake, My mother will make this cake on my daughter’s birthday, which is helding on next month. Because she loves her very much.
I saw such beautiful cakes on the sites :