I have always wanted to learn how to decorate cakes so when I noticed on one of my almost daily trips to Michaels that they were offering Wilton Cake Decorating Classes I immediately signed up.

Week one the teacher gave us an overview of how to use the various tools, showed us how to make Buttercream Frosting from scratch and how to fill and frost a cake.  With the theory of course that we would all return the following week with a frosted cake ready to decorate.

Of course, this is me, attending yet another thing that I really don't have time for, so although the other 11 girls in the class were busy practicing over the weekend and pre-making their delicious cakes and assorted icing colors 2 days in advance like they were supposed to, that was not the case here. One day prior to class, at 4pm, I posted a tweet that I was yet to bake a cake and make icing.  By 11:30pm that evening I had made just the first layer of cake.  By 4pm the next day (having spent all morning in class, attending parent teacher conference for the teen and running around after the twins) I realized I didn't have enough ingredients to make the second layer of cake so it was off to the supermarket.  By 5pm the cake was in the oven and the icing was being made.

Did I mention that class was starting at 6pm.

This is the moment I completely lost it.

The cake was supposed to cool for an hour, but ended up in the freezer to speed up the process, the red icing had turned a rust color because I hadn't made it in advance like I was supposed to and 5 minutes before class I was scrambling to apply the crumb layer of icing to the cakes, whilst the sides of the cake were literally falling apart in my hands – the crumb layer is the first layer of icing that tends to get crumbs from the cake caught up in it.  Of course it was at this point that I RAN. OUT. OF. ICING.  So I raced to my class, late of course, and purchased some pre-made icing.  The only problem being, that the pre-made icing isn't as thick as the homemade one (which makes it perfect for decorating though), so my top layer didn't harden quick enough for me to roll it before decorating.

However, I'm quite happy with my first attempt at decorating a cake … 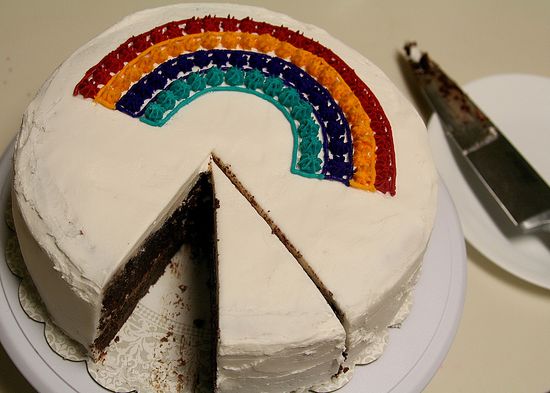 even though I didn't get to finish decorating it or rolling the icing so that it was beautiful and smooth.

Next week we are making icing clowns and roses.  This should be interesting.  And this time I will make my cake and icing 2 days in advance … I say this as if it's actually going to happen. And I won't sit next to the girl who doesn't need the class because her cakes look beautiful.

Course 1: 4 weeks. $22.50 (half price) + supplies. 2 hours each week. There is a kit you can purchase with the basic supplies needed for course 1 – from memory it is about $27.  Then there are extra things that are suggested such as a turntable, roller (I purchased a clay roller for $3.99), extra disposable icing bags and clown picks.  I had quite a few 40% off coupons so used those over days to purchase all of the supplies I needed plus a case to keep everything in.

There are 4 courses. You can get more information here.

4 Ways to Use Leftover Chicken Salad for School Lunches

A Spring Treat Table for Kids

Bre, your cake was adorable. I think we learn fondant in the next course – or maybe the one after that. I can’t wait.

Well I COULD do a styrofoam cake, but then I wouldn’t get to eat it and aside from decorating, eating is the best part :). I wonder if that is why I joined so I could justify baking so much cake and then HAVING to eat it too :).

That’s a great idea Sue. I think I will do that over the weekend.

Doesn’t cake decorating seem so easy peasy when we imagine it in our lil’ heads?!?!
But it ends up being a pain in the rear!!!!
I don’t know if you remember my attempt at a fondant cake when I was full on preggers with Cash.
It was a lovely disaster…lol!
But like you, I’ve always wanted to take a cake decorating class. One day I will!
Enough of my blubbering…your rainbow cake is ADORABLE!!

I started these classes with a friend who wanted to take them. I really was not interested but thought it would be something to do and they were 1/2 price that month. I really enjoyed them and ended up taking through level 3. It has become a somewhat hobby now!

Great job on your first one, can’t wait to see more!

I took the classes just over a year ago. They were so much fun. I made lots of friends and learned a lot. Our teacher suggested a Styrofoam cake so you could reuse it and not have to bake one every week. My husband thought that was a terrible idea and I did end up baking, but a lot of the girls didn’t and it seemed to work for them.

What about making cakes in advance when you do have time and then freezing them – they are much easier to cut and decorate when cold. Sue

I have thought about taking that class for years! Now there is a store about 5 minutes away from our house so maybe this is the year to do it. Although I still have sewing, photography and knitting classes as priorities ahead of this one. Let me know your final thoughts when you are all finished.

You should totally do it Melanie, if anyone would be a whizz at this, it’s you, the baking queen :). I’d love to do sewing and photography classes too, but there don’t seem to be any in my area – that I’ve found yet. I’d love to do embroidery as well. So many things, so little time. Miss you.

Not bad for a first attempt! Keep trying as you will only get better as you practice the techniques and Wilton classes are one of the best available.

Next time I go to Michaels, I’ll check it out. But I guess the schedules are at times when I work (that’s often the case..). Anyhow, thanks for the tip.