One of my favorite go-to dishes, and one that I often crave, is tomato soup with grilled cheese.  I'll admit to pouring it out of a can or carton in the past, but on my bucket list this year was to make tomato soup from scratch.   And I wanted to make it without the aid of canned tomatoes, but to use fresh ones instead.

There was a lot of taste-testing going on in my kitchen during this process and my husband may have commented that it looked like a murder had taken place after I put a little too much soup in the blender and the lid popped off (hence my suggestion below about doing half at a time), however the soup was delicious. 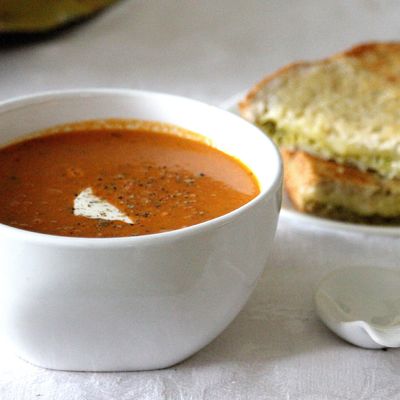 Put the oil, onion and garlic in a large pot and cook while stirring until the onion is soft.  Add the tomatoes.  Turn down the heat to med-low and simmer for about 8 minutes, stirring occasionally.

Next, add the vegetable broth, red wine, thyme and salt.  Bring to the boil.  Turn down the heat and simmer for another 5 minutes.

Return the soup to the pot on med-low heat.  Whisk in the sour cream, then the basil pesto.   Turn the heat down low to keep the soup warm while you make the grilled cheese.

Fill sourdough bread with basil pesto and a layer of thick-sliced mild cheddar cheese.  Place in a panini press until browned.

Remove the soup from the stove and serve, topping each bowl with another dollop of sour cream and cracked pepper.

(Servings:  This was the perfect amount for our family of 5)

The verdict:  Two thumbs up from the teenager, who will normally only eat tomatoes when I make homemade spaghetti sauce.

You are just too good T. I’m beginning to doubt that you’re even human. How do you do all that you do, so brilliantly well. Looking forward to trying your recipe sometime soon. I love tomato soup and grilled cheese too.

Congrats to you T. It’s be fun to see your blog grow into the success that it is. And no wonder with great posts like this 😉

Yum! I’m so gonna make this.

For a humble tomato soup and grill cheese sandwich, you make it look like a rather elegant combo… nice!

Thank you Anna.  I will never go back to canned tomato soup again.

Oh yeah, grilled cheese and tomato soup is the perfect comfort lunch. The pesto, red wine and sour cream just puts it over the edge.