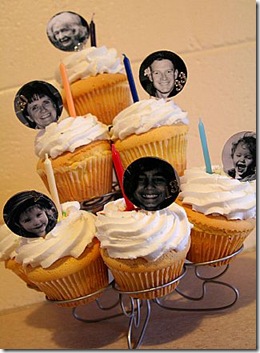 Having a party for more than one person but don't want to make several large cakes?  Personalized cupcakes is definitely the way to go in my book.

I personalized these recently for a family birthday celebration.

I'd be lying if I said I made the cupcakes, because well, no I didn't.  Instead they were ordered from a wonderful bakery.  They are muffin size and fit perfectly into the 3-tiered cupcake stand.

I put a different color candle into each cupcake and scattered a few sprinkles over the top for a little color.

This is how I did the photographs: 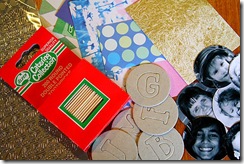 2. Punch out the letter from the chipboard – hang onto it though, you may be able to use it in a scrapbook of the party later.

3. Cut a small piece of patterned scrap paper (just enough to fit over the gap of the punched out letter).

4. Turn the chipboard over (so the letter is backwards and straight) and place the patterned paper face down over the top of the letter.

5. Remove the backing from the photograph (the person who's name starts with the letter) and stick it to the back of the chipboard letter thus holding the patterned scrap paper in place (no need for glue). 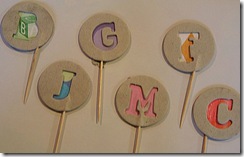 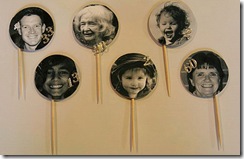 6. Stick the corresponding age using the number stickers onto the picture.

7. Very carefully push the end of a toothpick into the chipboard at the base of the picture, you may need to angle it just slightly depending on where the gap in the letter is, you don't want to be able to see the toothpick (see pic to the left above)

8. Carefully put the other end of the toothpick into the cupcake so the picture sits just above the icing.

So now even when the party person has the photograph or scrapped letter facing toward them to blow out their candle, guests can see a little something on the other side too.

What a fantastic idea! I need to get a cupcake stand one of these days.

You amaze me. You really do. I don’t know where you come up with this stuff. I was in the store the other say and saw this stand and thought of you. I stood there thinking you are brilliant! 🙂