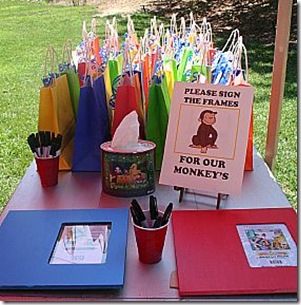 Party favors are a big thing for me. You will never find me handing out a bag of candy. Why? Well because whenever one of my kids get one at a party I end up eating it ha ha. I just like to think of the other mother's waist lines. Aren't I kind ha ha.

I prefer to give little gifts to each of the party guests. So for our Curious George themed party, this is what I did.

I left multi-colored bags on a table and had each child write their name on it as they arrived at the party. This was 'their' bag. In this bag they could put any candy from the Pinata, bubbles blowers, face masks and coloring pages left over once the party had ended. It was also where I could put their party favors.

Each child when they arrived at the party received a sipper cup that they could use at the party and then take home with them. The cups were purchased at Oriental Trading, they are only $9.99 per dozen. They are the 'decorate your own' variety so I pulled out the paper insert that was meant to be colored in and instead printed out photos of the babies wearing a Curious George costume onto plain paper and slotted that right back into the cup. 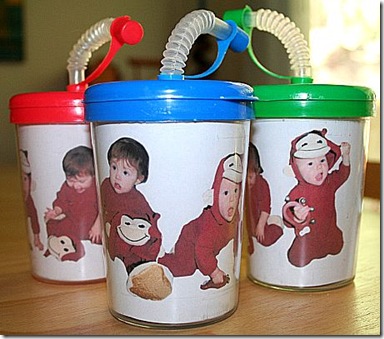 The other gift they each received was a certificate and photograph of the babies at the party in a frame. I purchased double 4 x 6 acrylic frames from Aaron Brothers and Michaels. Before the guests arrived I downloaded a Curious George birthday certificate onto the computer and typed each guests name onto it. I printed them out and put them in one side of the frame and then while I had the babies strapped into their highchairs waiting for their cake I snapped a quick photo of them and printed off a ton of copies to put into the other side of the frame.

There were also special birthday kid certificates on the website so I printed those out too and the babies have those on their dressers. 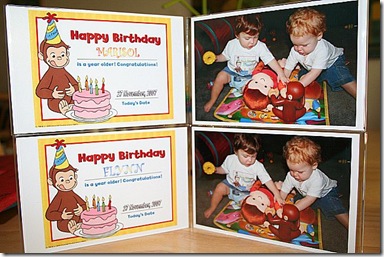 I also thought it would be fun to have all of the guests sign something the babies could keep.

So after much searching I found some very plain wooden frames at Michaels. I painted one red (to match Marisol's bedroom) and the other blue (to match Flynn's bedroom) – these were also their colors for the party day. Then I popped a sign up on the guests gift table along with half a dozen permanent markers (because we all know that if you only left one out it would disappear within seconds) and had each guest sign the frames. They are now proudly hanging on the twins bedroom walls. 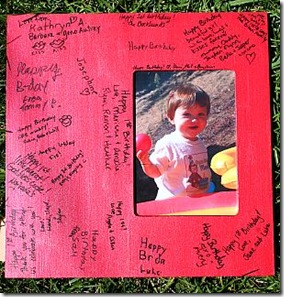 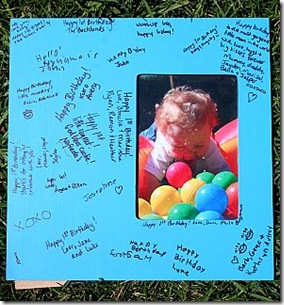 Holiday Bake, Craft and Sew Along {and a giveaway}

This is all adorable!!!