Yesterday was such beautiful weather there was no way we could hide out indoors.

We packed up the little ones and a backpack full of supplies and headed down the coast to the Andrew Molera State Park at Big Sur.

Our initial plan was to do a 3 mile hike and have a play at the beach. Funny how plans don't always turn out the way you thought they would.

As we drove through the gate at the park, we were informed that to access the trails and beach we would need to wade through the river, which was about knee deep that day.  Awesome.  And I mean that in a positive way.  I was more than up for this challenge, despite my husband looking at me like I may have replaced his wife with a total stranger.

Before I share photos (and there are a lot) of our adventure, I want to show you the map of our hike: 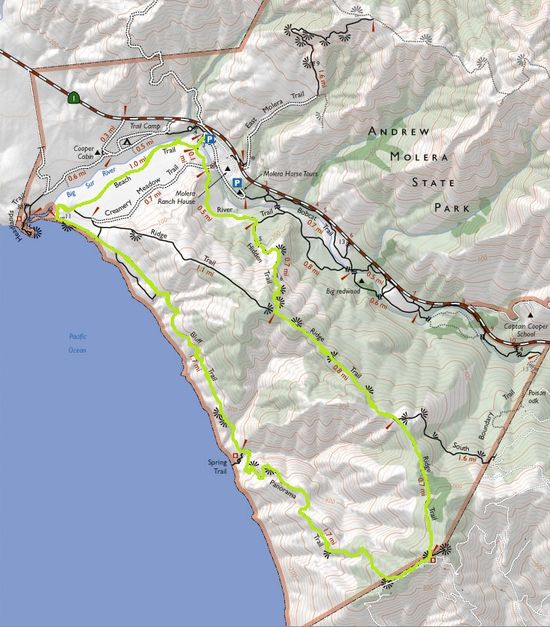 I've highlighted in green the route we took and although the type is tiny, you may be able to make out the names of each trail and how long each one was.

The kids thoroughly enjoyed their piggy-back rides across the river to start off our day – which you will see a photograph of at the end of the post. 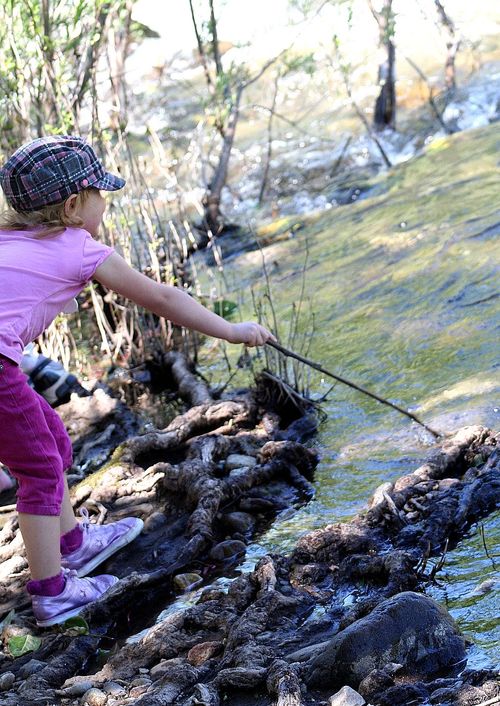 We then commenced what was going to be a very, very long hike.  The first portion was a 1 mile hike to the beach on the Beach Trail.  At times the brush and wildflowers were towering above our heads and the trail was so narrow we were fighting our way through.  Especially the kids.  Sure it was above our heads too, but the twins are so tiny it was literally towering above them and they were using sticks to push through the brush.  The wildflowers were absolutely spectacular though, such beautiful colors surrounded us on the path and off into the distance. 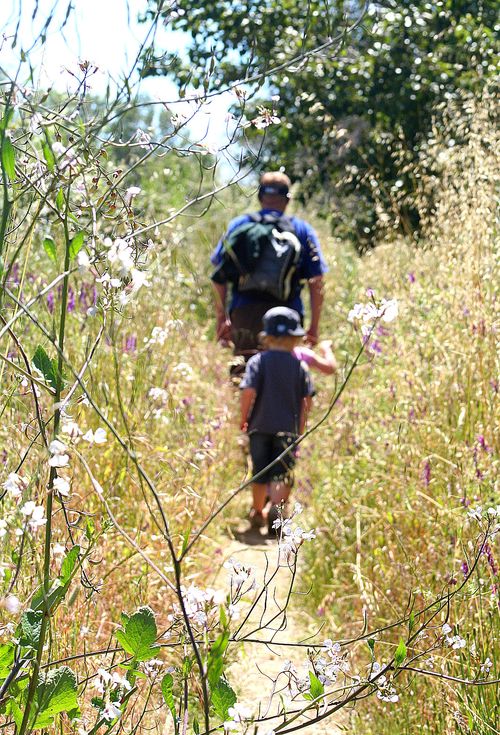 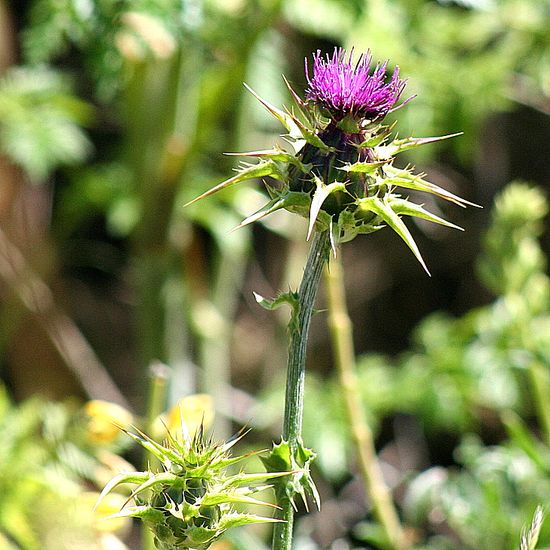 I love the next two photographs of M fighting her way through the flowers.  It's hard to believe she's on the trail. 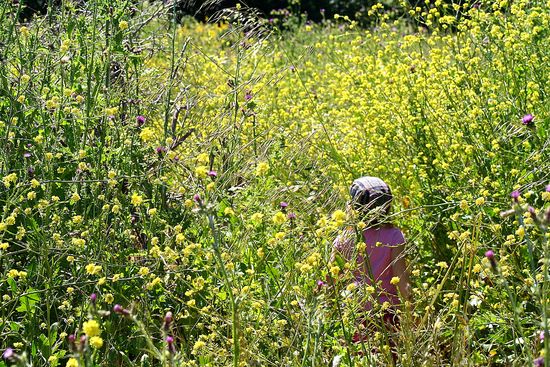 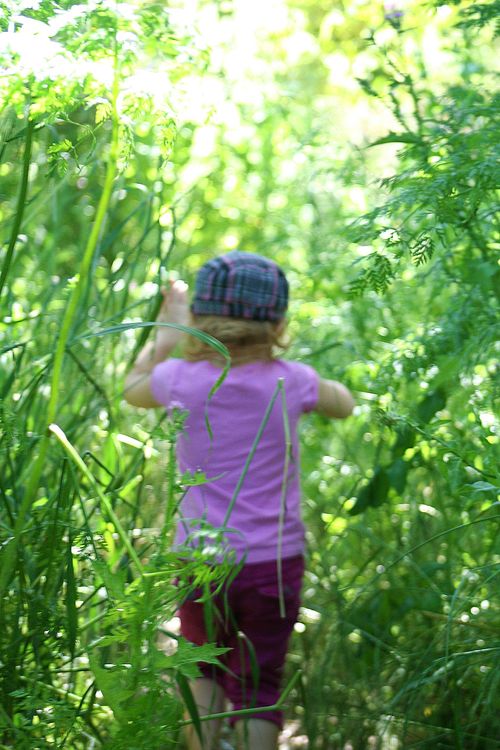 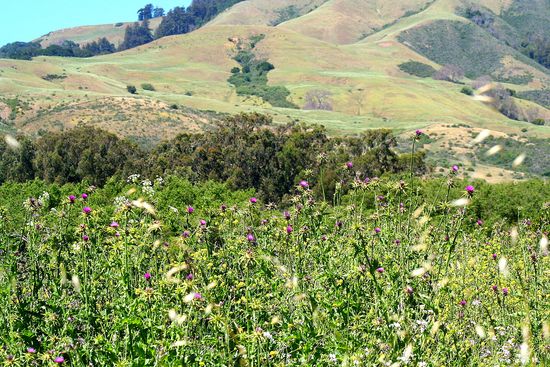 The end of the trail opened up to a beautiful beach.  Previous visitors had built little huts using the driftwood, which the kids absolutely loved.  It was extremely windy there but the view was spectacular and the water so clear.  We found a little spot and had some snacks and let the kids play by the water before heading off on what was going to be a long journey. 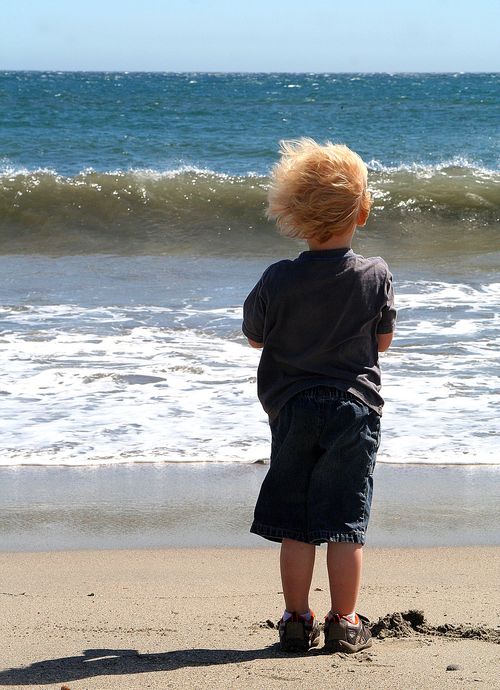 The next photo is very important.  You will see the significance of it as you read more about our adventure. 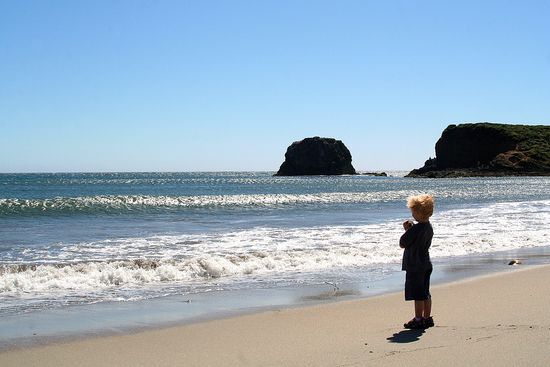 At the time that I took the next photo.  I didn't realize that we would soon be hiking over the mountains in the distance. 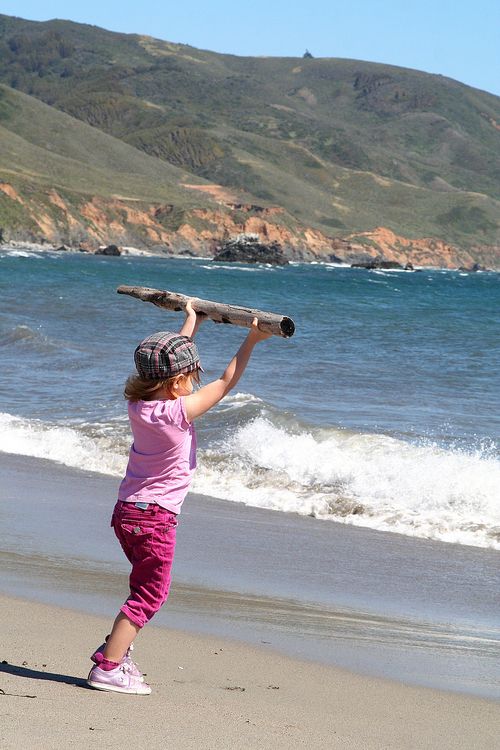 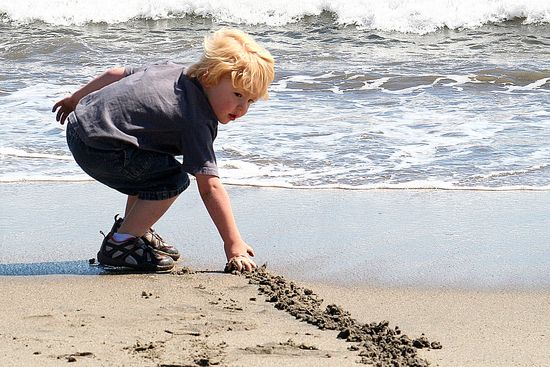 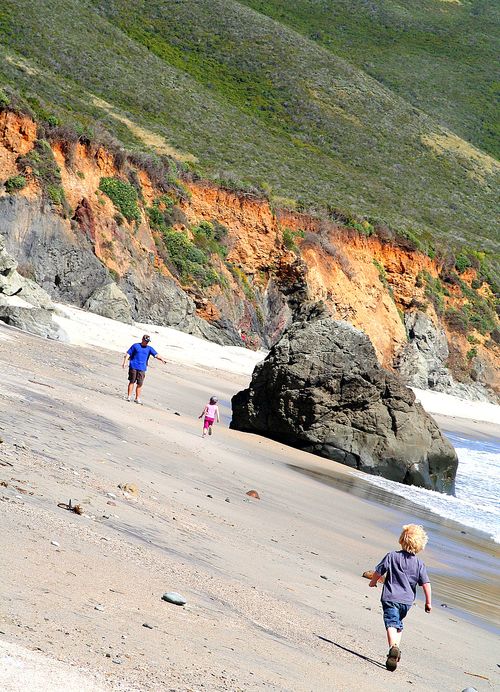 I love this.  My husband conquers a large rock, little does he know, he's about to hike up the mountain behind him. 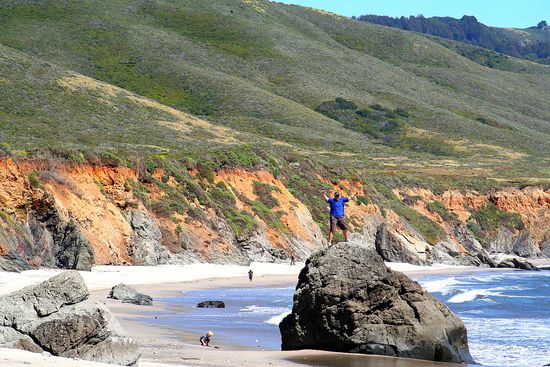 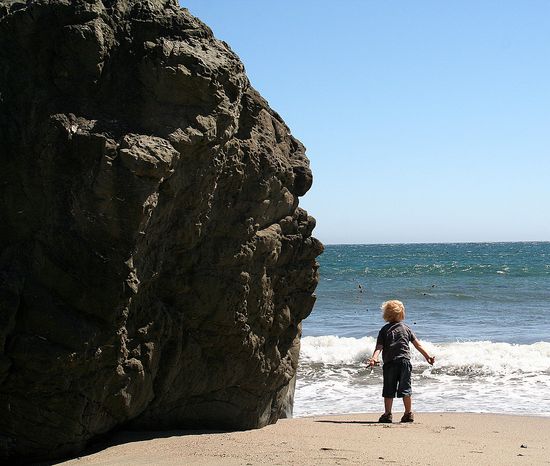 By this stage the wind on the beach had picked up and Marisol was none too happy with this, so we decided to set off on another short hike.

We hadn't brought a map with us and we didn't have any reception on our phones (where we had downloaded a map) so we deliberated a little while on whether to take the same route back to the car or meander off on another trail we had passed.   We could see a lot of people hiking up on the hills so we decided to check out the other trail (or should I say, Marisol decided and was already off climbing).  We thought that worst case scenario, if the kids were getting tired we could always turn back around and go back the way we had come.  Thus began our walk along the Bluff Trail (1.7 miles) which we knew would be very scenic at least.  It was a fairly flat trail for quite a while winding along the cliffs, and the view was beautiful.  We chatted to another couple on the trail who were heading in the opposite direction and had a map with them.  They told us that the trail lead back to the carpark, but the entire length of the trail in a circle was almost 8 miles, however there was another trail only 10 minutes further along that lead down to a small beach that was apparently very pretty.  We decided to head there, then turn around and go back the way we had come.  I have forgotten to mention that at this point Flynn was running.  I am not kidding.  He had run over a mile at this point and was not about to slow down anytime soon.  Shortly after the trail became a little rockier, we were weaving up and down in spots and jumping over puddles.  Another family (with teenagers) passed us and they all marveled at Flynn and his endurance. 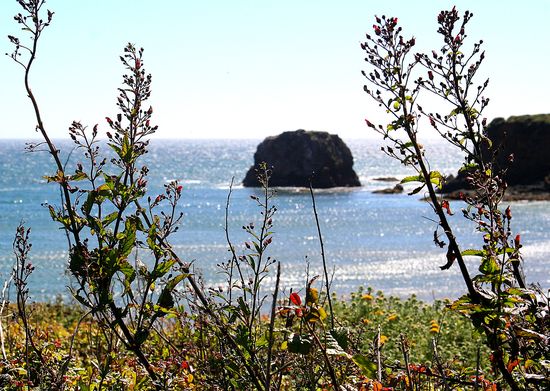 Do you recognize the rock formation in the background?  Continue watching for it as I snap photographs further on our hike. 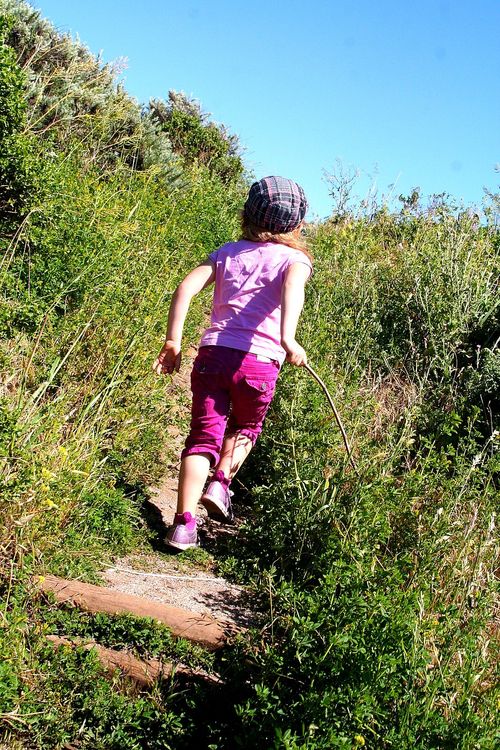 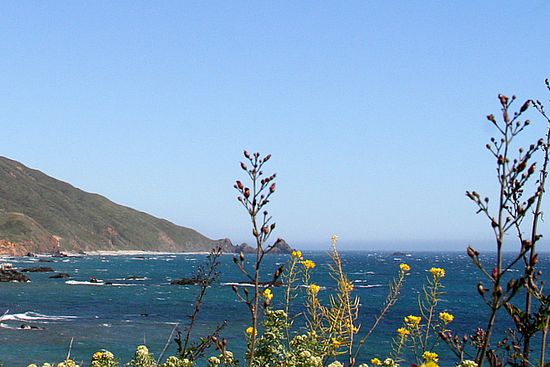 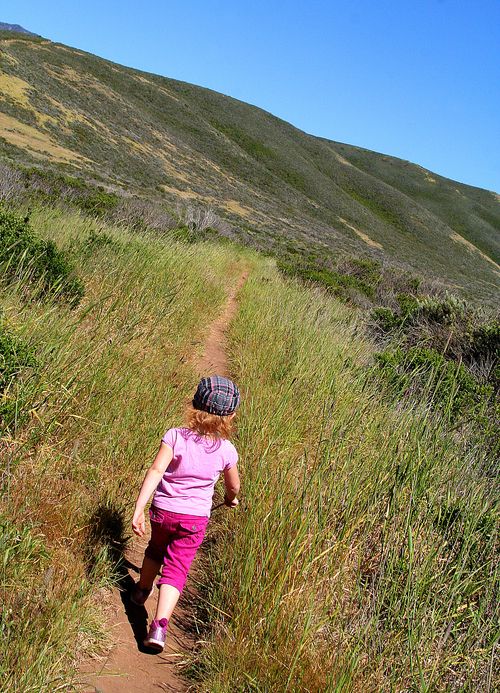 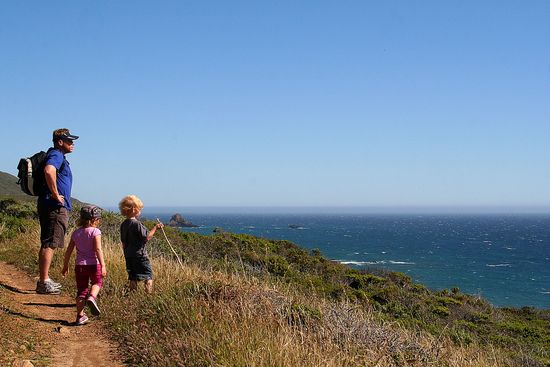 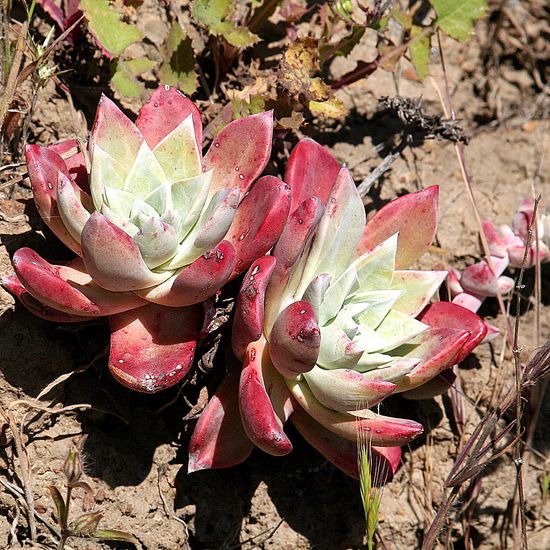 As we neared the small Spring Trail that was recommended by the hiker's we had passed we noticed that the other family and another couple who had passed us were looking at the map and signs posted in the area.  We made a collective decision to keep on going – well actually one of the ladies asked Flynn what he thought and he took off on the main trail and told everyone to come on.  What on earth were we getting into.

So we missed Spring Trail and instead ventured along Panorama Trail.  And panoramic it was.  It was also very steep.  The other hikers took off ahead of us as we slowly wound in and out of brush and rocky areas and up the mountain.  It was exhausting.  Each time we thought we were at the top of a mountain, we wound around onto another section that we hadn't seen previously.  Marisol needed to ride on daddy's shoulders through a lot of this section, but Flynn powered on, through the really brushy and steep sections he held onto the back of my shirt and I cleared the path for him.

Until … daddy took a fall, going uphill with Marisol on his shoulders.  They came tumbling down and landed on Flynn.  It could have been very ugly at this point and we estimated we hadn't hit the 4 mile mark yet, which meant we were only halfway back to the car.   Panic set in for a few brief minutes.  Randy and Flynn sustained a few cuts and scrapes but thankfully Marisol was okay.  I pulled a couple of thorns out of Flynn's hand, had thankfully packed a first aid kit in our backpack so put a bandaid on his knee and deliberately didn't comment on his arm being scraped up because he hadn't noticed yet.  After a bout of tears, a much needed drink, and a rest, off he went again.  Daddy offered to carry him for a little while, but no, he was determined.  He gave me a quick "follow me" and he was back hiking up the mountain again. 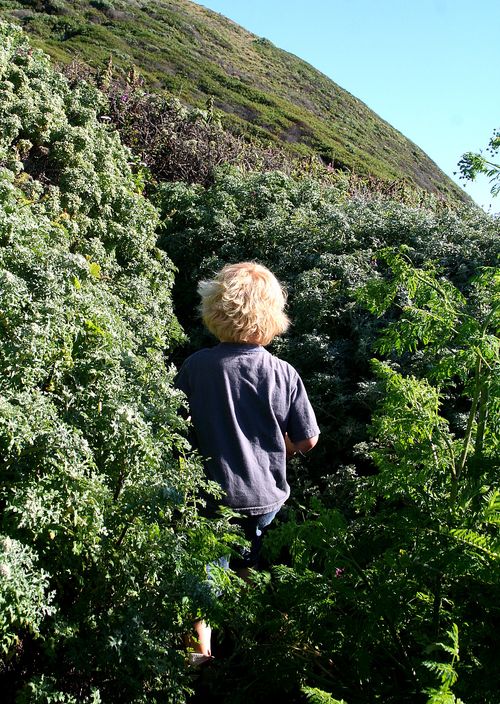 Do you see the small stretch of beach in the middle of the photo below?  That was the beach we had been playing on earlier. 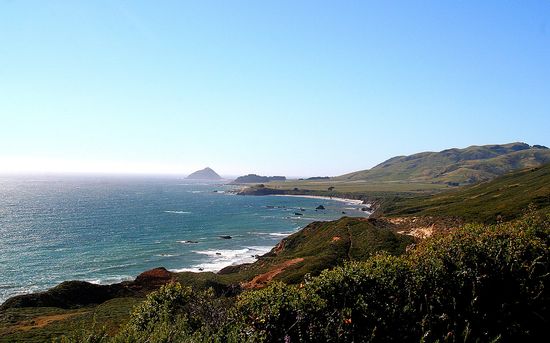 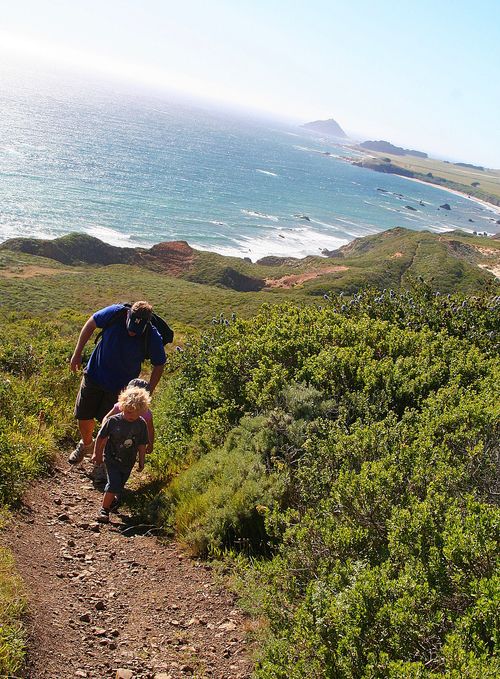 At the junction between Panorama Trail and Ridge Trail there was a wooden bench.  We took the opportunity to stop for a drink, take in the view and check the little injuries.  The kids enjoyed a lollipop (sugar fix to keep them going) and then we powered on.  We were starting to get a little concerned about the time at this point.  It was already 6pm and we knew we were over halfway but weren't exactly sure what lay ahead.  The last couple of miles had taken their toll (mainly on myself and Marisol) and it had taken a long time to work our way to that point.

The beginning of Ridge Trail was lovely, it was mostly downhill, and through a beautiful forest area where it was shaded.  We were worried that where there was a downhill there may also be an uphill, but this had given us some much needed rest and shade and we were moving a lot quicker.  The trail was wide too which made it much easier to walk side-by-side.  It was truly a beautiful stretch.  The kids felt energized again, as did I. 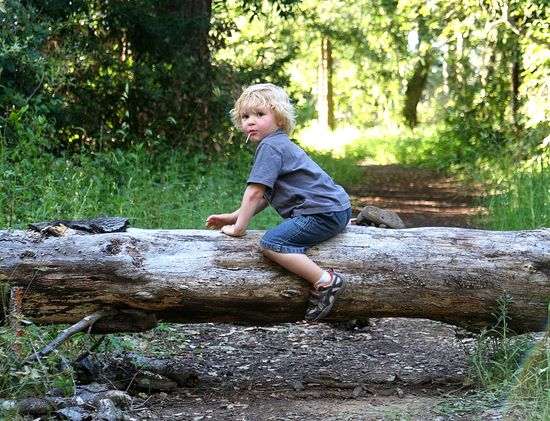 As we came out of the forest we could see another small, but steep hill in front of us.  The kids didn't like that sight very much and so Randy and I decided we would carry each one up.  But, we were saved.  At the very base of the hill, we noticed a signpost leading off to what we had been looking for.  Hidden Trail.  It was a very narrow, very windy trail leading down the mountain.  It was also very slippery.  For every few steps we took, one of the kids slid.  But with a quick "I'm okay, I'm okay" off they went again.  They could see the ranch in the distance which was near the carpark and they knew we were heading back toward the river so nothing was going to upset them at this point.  Well except the bugs.  There were a lot of black beetles on the path.  Marisol screamed at each one she saw. 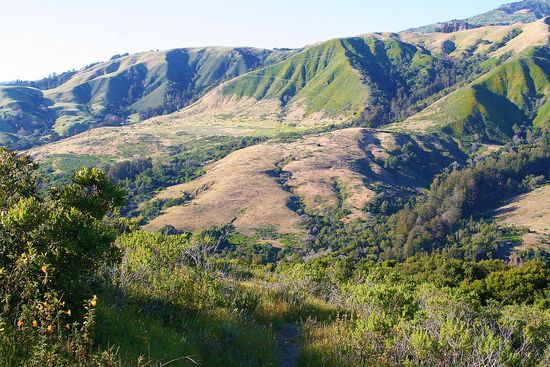 From Hidden Trail, we ventured onto River Trail, crossing Creamery Meadow and down to the river crossing where we each popped a toddler on our back and ventured across stream.  What you can't see in the photo is that there were rapids on the right side (of the photograph) and that the water was moving quite quickly. 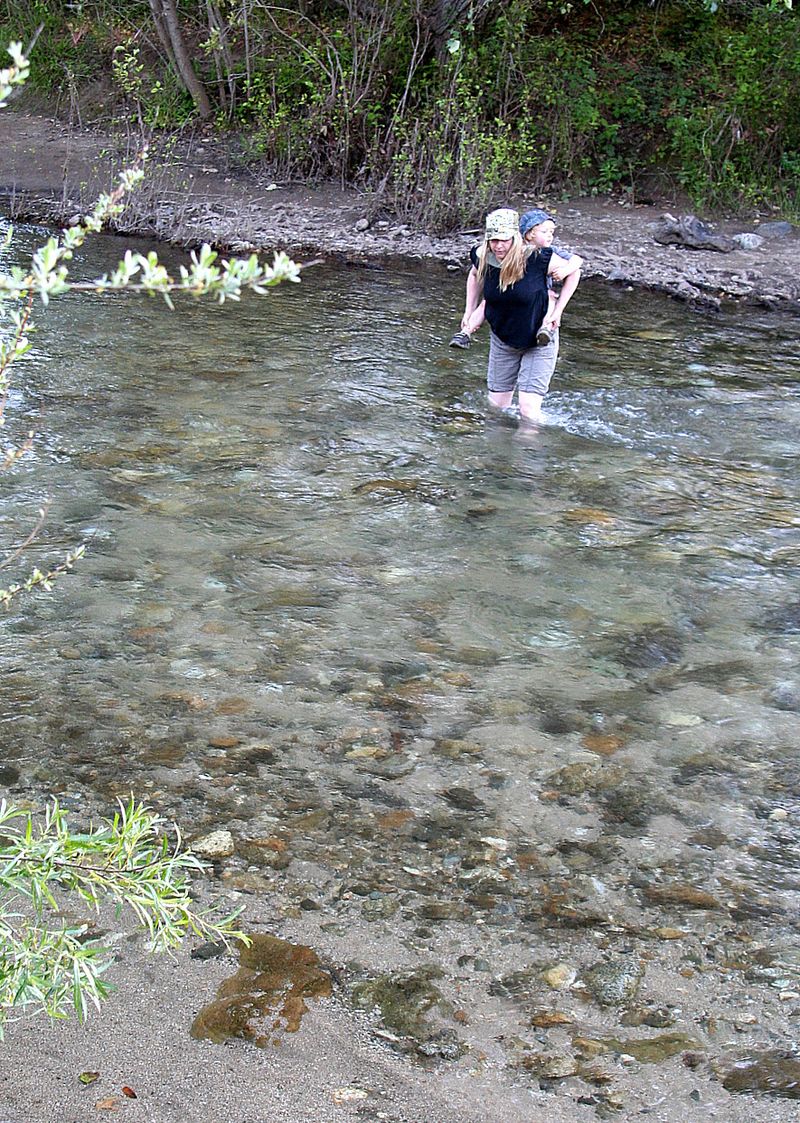 We thought for sure the kids would fall asleep in the car on the drive home.  They had to be exhausted, especially Flynn who had conquered the trail.  Instead they read books, watched a movie and told each other jokes. We picked up dinner on our way home.  We were all starving.  Again we thought the kids would be exhausted.  But no.  They were on some kind of incredible high and didn't fall asleep until after 10pm.

They have much more energy than me.

a day at the cove

OVER 50 Things To Do In Temecula With Kids

Every Monday or Tuesday I take the 3 year old and 1 year old somewhere for a good hike. My own “Wow, we just went 7.3 miles on a mountain and I didn’t have a map” trip was on Mount Tamalpais down to Stinson Beach and back up. I had the 1 year old in the backpack and force-marched the 3 year old. Great views, great experience, great time, but it took a hell of a lot longer than I thought it would, and there were some pretty scary parts as the trail narrowed above drop-offs. Good for you for taking two three year olds up a mountain.

Love this! What troopers your kiddos are! Beautiful photos too, as always 🙂 I had to laugh when you mentioned Marisol screaming about the beetles, Brynn is the same way! She completely loses it when she sees those things!

Oh they have so much more energy!

I can’t believe you carried a baby and took a toddler on your own all that way. You rock.

I’m always looking for new places so I’d love to know any other hiking spots you have loved.

Funny how kids can surprise you. What a marvelous adventure.