I am a little addicted to finding thrift store items and making them over.

This wooden rack I found the same day, and at the same Goodwill store, as the one I used for Marisol's kitchen.   At the time I wasn't sure which one I would use for her kitchen, but knew that I would use the other either in one of the bathrooms, or in our own kitchen.  It was only $2.99, and was unfinished wood, so I freshened it up with a pop of color. 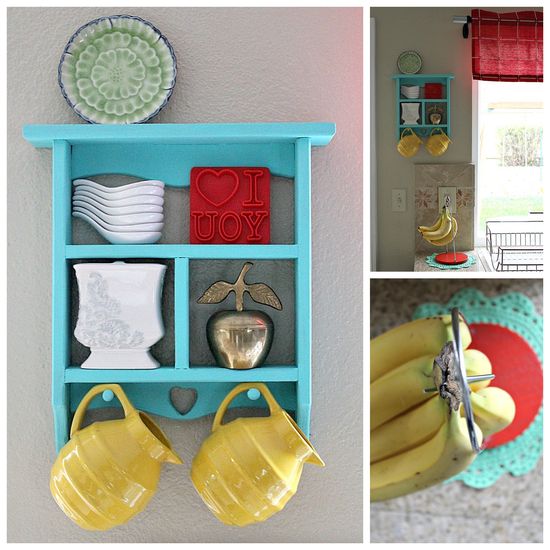 I had found the banana stand a few weeks earlier at the same Goodwill store for 99c.  It had a painted yellow wood base but needed to be brightened up a little, so a few coats of red paint were applied.

I found a lot of the items for the shelf at the same Goodwill store.  The yellow jugs were $2.99 each (from memory), the little gold apple bell was 99c, the white vase/utensil holder (I'm not quite sure what it is intended for, but I think it's perfect for tea spoons and stirrers for a tea party) was $1.99, and the lovely plate above the shelf was 99c too.

Rusty and Rosy: Learning about the Seasons

How To Paint A Wood Bed Frame

How To Update A Secondhand Armoire

Leaf and Tree Art and Craft Projects for Kids