We celebrated with friends. It was chaotic but fun.  Picture 3 toddlers and 4 Boxers (as in the dog variety) in the one spot. Together.  For about 4 hours.

The food was fabulous and the company even more so though.

Here's a little round-up of the festive food I made yesterday: 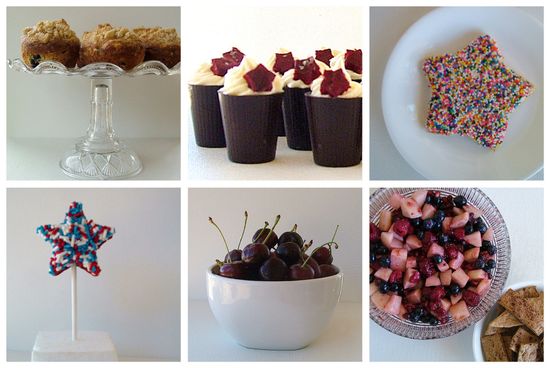 Blueberry Muffins: fresh out of the oven for breakfast.

Vanilla Mousse Cups: Chocolate cups with French vanilla mousse piped into them and topped with a red velvet cake star and white cake sparkles.  Note: the red velvet stars were made from the excess cake cut off the Star Pops before they were decorated (details below).  I rolled the pieces to flatten them, then used a small star-shaped fondant cutter to cut out the stars.

Firework Fairy Bread:  As most of you who read me regularly know, fairy bread is a traditional party treat  (in Australia) for children (and me). For these I used a star-shaped cookie cutter.

Annie's Fruit Salsa & Cinnamon Chips: The recipe for this is one I've used a few times from One More Moore, each time I amend it just a little to suit the party though.  This time being the 4th of July, I used the following – raspberries, blueberries, Asian pears, and pomegranate seeds with a mixed berry preserve.  The cinnamon chips were made using whole wheat pita bread.

Cherries:  I think these speak for themselves.

Have I mentioned that I cannot wait for my new camera to arrive so I can get back to taking lovely photographs.

Wowza you went all out and I was pretty happy with the veggie plate I took to the potluck before now!