How to make the best popsicle stick bird feeders that kids will not only love to make, but the birds will love too.

Disclosure: This project has been compensated as part of a craft recipe project using Elmer’s #collectivebias #xtremeschoolglue #gluenglitter

I was recently asked to host an Elmer’s X-TREME craft party at my house. My mission, should I choose to accept it, was to build birdhouses using wood, and after I accepted my mission, I was advised that a mystery product also needed to be used, and I could choose glitter or buttons.

Pre-party I attempted to build a birdhouse for the first time out of popsicle sticks and an hour later still not being finished I realized that this plan had disaster written all over it.  After all, I had invited four and five-year-old children over. Short attention spans coupled with fiddly work was not going to be a good mix for them. So a quick revision of my plan and a quick 30-minute project later and this is what I came up with instead: 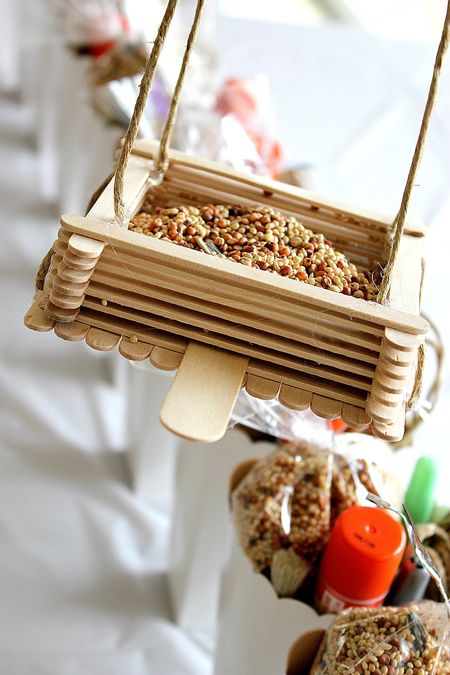 So once our plan was in place, Marisol and I hit the ground running for craft supplies and food for our party.

Sticking with the orange, white and blue theme of Elmer’s, I had a blast coming up with food for the party: 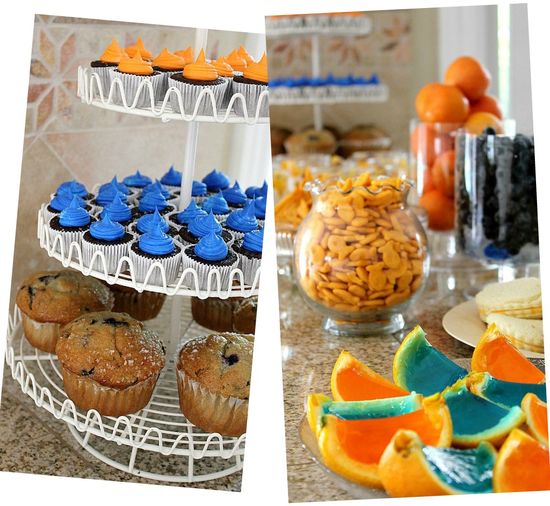 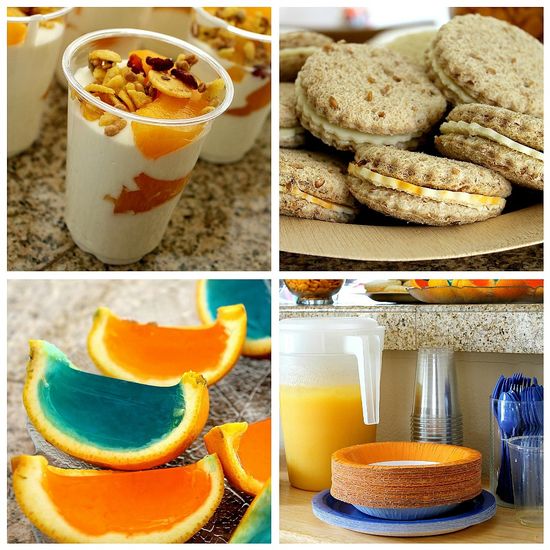 After lunch and playing outside, we settled indoors to do the craft project. We extended our new dining room table and placed a plastic tablecloth down to protect it, hung the bird feeder that I had made from the light and then lined up lots of little gift boxes for all of the children containing all of the supplies they would need to make their project. 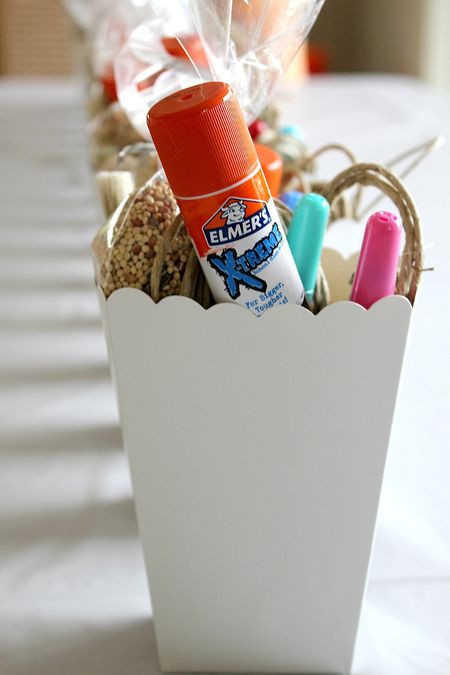 To make the bird feeder: 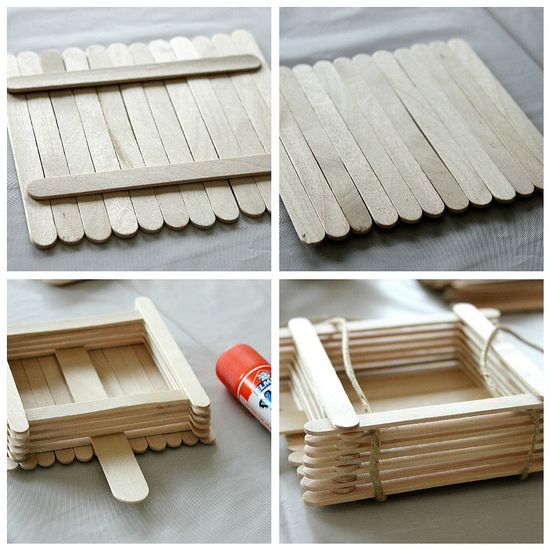 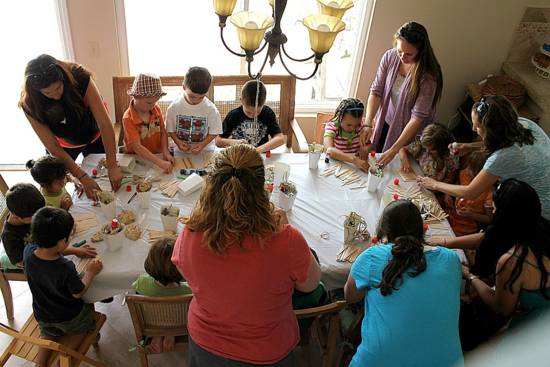 All of our little friends took their bird feeders home to paint them and fill with seed. Marisol and Flynn finished theirs after the party but they are yet to be hung outside. First I need to track down that outdoor varnish. Let the unpacking of boxes commence …. 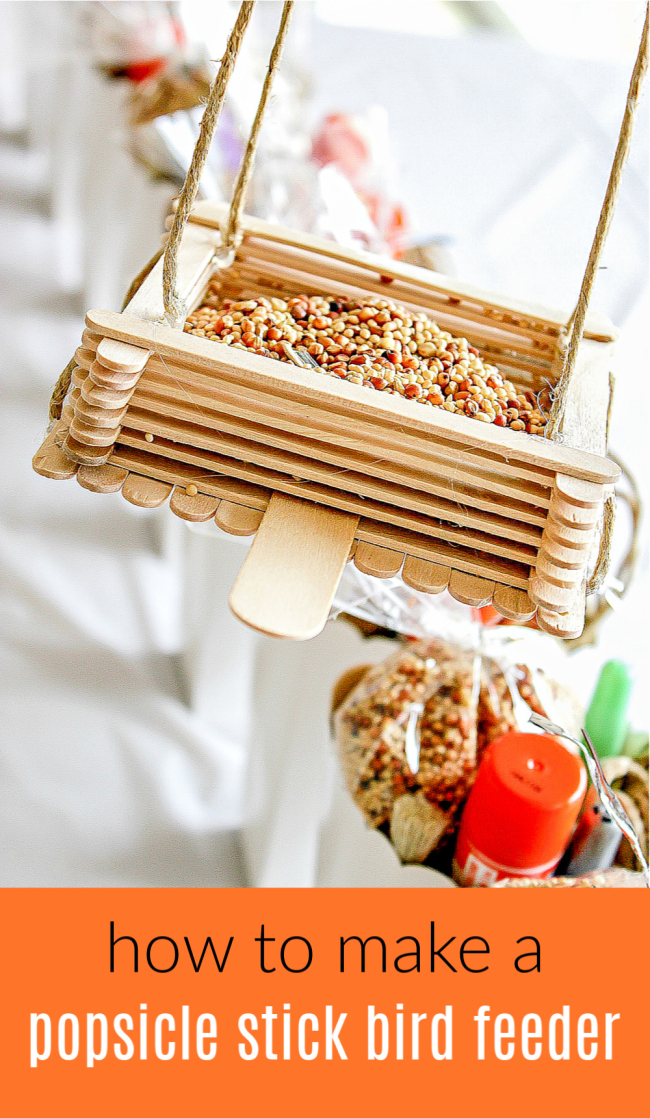 Picnic at Lake Miramar with Family This Summer

How To Set Meal Planning Goals For Next Year

Very, very, very cool! Super fly! 😉 This is just perfect for me to make next week with my kiddos!
Thanks so much!

I like this a lot! I think I’ll make these with a group of my summer camp kids!

We had a great time! You are one hot, crafty Mama!The kids finished their feeders after naps, I’ll send you pics once they are hung up!

What a fun craft…great job with the craft AND the awesome looking food! a

Those are the cutest little bird feeders ever! And the blue & orange food is amazing. Great job, as always, Tonya!

You are so creative! Great project to add to my Popsicle Crafts Pinterest board!

Thank you Lolo, it was a great time, albeit a little crazy (and loud) with all the kids crafting together 🙂

Thanks Amy, the kids love them … although mummy still hasn't tracked down her outdoor sealer to protect them.  I must get onto that.

Yay, I'm so glad you all came over, I loved catching up with everyone again, I missed you all while I was away.  I'd love to see the pics of the finished feeders when you get a chance.

What a great party!! I love the attention to detail! The orange boats are adorable! Great job!

I love those bird feeders! Thanks so much for sharing. That is such a simple idea and I love the price tag. 🙂 It looks like you had a great party.

Can you explain the role of the larger younger depressor to me? I don’t get it…

That should have said tongue depressor not younger. Sorry.

It's just an extra little perch for them to land on, but I thought it would be better to be wider than as narrow as the regular craft sticks.  I noticed if we had a few birds flying around the bird feeder that some would stand out on the perch before pushing their way into the seed :).

Wonderful idea, I will include it for our summer camp here at the museum!! We are zero budget and offer free classes…. so this is perfect !!!!! Thank you!

Hi Tonya. Just wanted to let you know that I featured this post on my Facebook page during April and people loved it. It made it into the top 20 for the month, of which I always do a round up. So today I’ve featured you on my blog as well (link below). Thanks for such an awesome post! http://craftsbyamanda.com/2014/05/great-craft-ideas-may-2014.html

The bird feeders are so cute, and I love the jelly oranges!

Such a cute and simple craft. I have 5 boys. Boys love to do crafts. My boys are very male, full of testosterone, and very anti-pink. They are archery shooting type men in training. Think brave heart and gladiator.
To help them cross over into the craft/creative zone I have to be creative myself. Hide the link and glitter, replace normal art supplies with sticks, stones, and natural colored supplies… Then they are all in!

Hello! I’m contacting you on behalf of Feeding the Future, an Australian food security guild. I would like to use your photos in a resource kit for kids, encouraging them to spend more time in the garden.

If we credit your website, would this be okay with you? This is such a great activity!

You can see more information on our Facebook page: https://www.facebook.com/TasmaniaFeedingTheFuture

Tonya I love this X-Treme bird feeders idea to do with the grand kids. They love to watch the birds eating out of our feeders. I am looking for projects to do with them for summer to keep them busy and this is surly one of them.Simple but cute. I am also going to pass this on to teachers for a student project. Does the outdoor paint hurt the birds if not sealed? Did you find any outdoor varnish that works? Thanks for great idea.

It is look like that it was a awesome party.

This is a wonderful idea. I am featuring this on my blog with a link and photo if you don’t mind.